The dramatic moment when a NASA spacecraft intentionally flew head-on into an asteroid was captured by a tiny, Italian-built satellite that was designed to survey the aftermath of the cosmic collision.

Photos of NASA’s DART probe slamming into a small and harmless asteroid known as Dimorphos were released Tuesday by L’Agenzia Spaziale Italiana, the Italian Space Agency. The images show Dimorphos and the larger, brighter asteroid that it orbits right before and immediately after the impact.

The intentional crash, which occurred Monday, was the world’s first test of a planetary defense strategy that involves “nudging” an asteroid to permanently alter its trajectory. Dimorphos is located about 6.8 million miles from Earth and does not pose any threat to the planet.

The Italian Space Agency’s cubesat, dubbed LICIACube, was released as the DART spacecraft neared its asteroid target. The tiny companion satellite captured spectacular images of the change in Dimorphos’ brightness as the DART probe smacked into the space rock’s surface, creating a plume of ejected material.

Argotec, the Turin-based engineering firm that built LICIACube, tweeted Tuesday: “This is exactly where the #NASA #DartMission ended. An incredible emotion, the beginning of new discoveries.”

A few minutes after the cosmic spectacle, LICIACube flew within 35 miles of Dimorphos, snapping photos of the outcome. The first photos were beamed back to Earth at 4:23 a.m. local time in Italy, according to the Italian Space Agency.

NASA confirmed Monday that the DART mission was a success, but it may take up to several weeks to monitor for changes in the asteroid’s trajectory. The goal was to shave several minutes off Dimorphos’ nearly 12-hour orbit around Didymos. 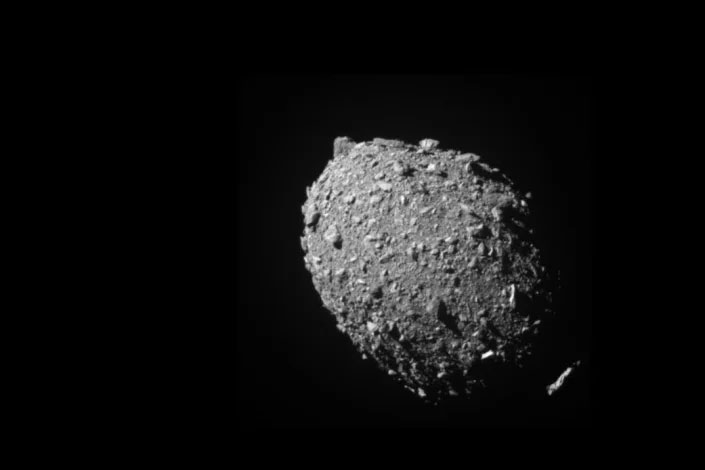 It will also take some time to process and study the imagery from LICIACube and the DART spacecraft’s own onboard camera, which broadcast live views as the probe approached Dimorphos, right up until it slammed into the asteroid’s boulder-filled surface.

“Now weeks and months of hard work are now starting for scientists and technicians involved in this mission, so stay tuned because we will have a lot to tell!” the LICIACube team tweeted Tuesday.

The tiny cubesat was deployed by the DART probe on Sept. 11. In the weeks leading up to the main event, LICIACube (short for Light Italian Cubesat for Imaging Asteroids) captured test photos of Earth and the Pleiades star cluster.

The cubesat is carrying two cameras: one with a wider field of view nicknamed LUKE, and a black-and-white camera dubbed LEIA that will capture high-resolution images.

The DART mission, short for Double Asteroid Redirection Test, was designed to test humanity’s ability to protect Earth from a potentially catastrophic collision with a space rock.