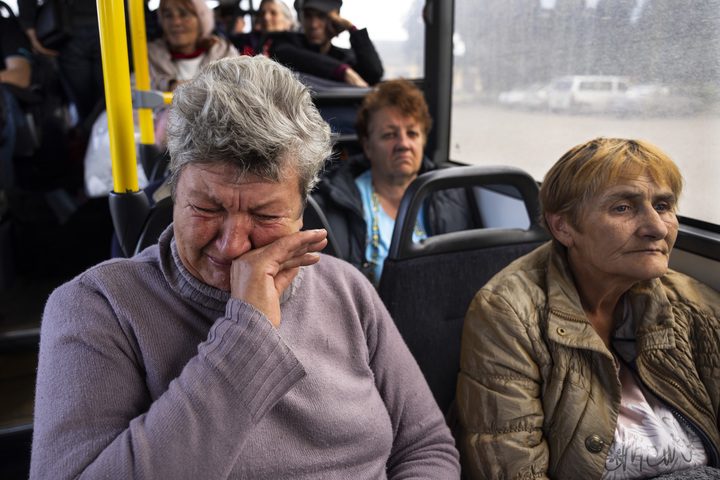 Svitlana, 60, cries after fleeing the front lines of Kupiansk and losing her home to shelling, on board a refugee bus headed to Kharkiv on September 22, 2022 in the Kharkiv region, Ukraine. In recent weeks, Ukrainian forces have reclaimed villages east and south of Kharkiv, as Russian forces have withdrawn from areas they’ve occupied since early in the war. (Photo by Paula Bronstein/Getty Images)

Zelensky: Russia’s mobilization is admission of failure. President Volodymyr Zelensky called on Russians to “protest, fight back, run away or surrender to Ukraine,” in his daily address. “You are already complicit in all these crimes, murders, and torture of Ukrainians because you remain silent. It’s time for you to choose, for men to choose to die or to live,” Zelensky said.

Poll: Most Ukrainians don’t want to permanently move to US, EU. Asked if they would permanently move to the European Union or the U.S. if they were granted citizenship there without conditions, 91% of Ukrainians said “no,” according to a recent poll by the Kyiv International Institute of Sociology. In October 2020, 69% said “no.”

Novaya Gazeta: Russian government plans to mobilize 1 million people against Ukraine. The seventh paragraph of Russian President Vladimir Putin’s decree on mobilization, intended for internal use, states that up to one million people can be drafted into the army, Russian media Novaya Gazeta reported on Sept. 22, citing unnamed sources in the Kremlin. “They changed the figure several times and eventually settled on a million,” the source said.

Mayor: Russian troops stage ‘terrorist attack’ in Melitopol to blame Ukraine. Russian forces have staged a “terrorist attack,” setting off an explosion in central Melitopol, Zaporizhzhia Oblast, to accuse Ukraine of launching terror attacks before a pseudo-referendum there, Melitopol Mayor Ivan Fedorov reported on Sept. 22. Three Russian soldiers were killed as a result of the explosion; casualties among civilians are to be clarified, according to Fedorov.

Kuleba: France, Ukraine working on new Caesar howitzers delivery. Foreign Minister Dmytro Kuleba met with his French counterpart Catherine Colonna on Sept. 22 to discuss a wide range of topics, including support for Ukraine and the shipment of additional arms.

Blinken: Russia ‘shredded’ international order, can’t get away with it. U.S. Secretary of State Antony Blinken said on Sept. 22 during a UN meeting that the world “can’t let President (Vladimir) Putin get away with (war).” He added that “wherever the Russian tide recedes, we’ve discovered the horror that’s left in its wake,” referring to Bucha, Irpin, and Izium, where torture chambers and mass graves have been discovered.

ISW: Kremlin likely downplays prisoner swap with Ukraine. The Institute for the Study of War reports that an unexpected prisoner swap which was announced the same day as partial mobilization, is “deeply unpopular” among Russian nationalists and military bloggers. The Kremlin exchanged 215 Ukrainian prisoners of war, including captured foreign nationals and some of the members of the National Guard’s Azov regiment. The experts noted that far-right Russian military bloggers criticized the exchange and asked if the Kremlin had given up on the ”de-Nazification” of Ukraine, one of the stated goals of the Russian February invasion. 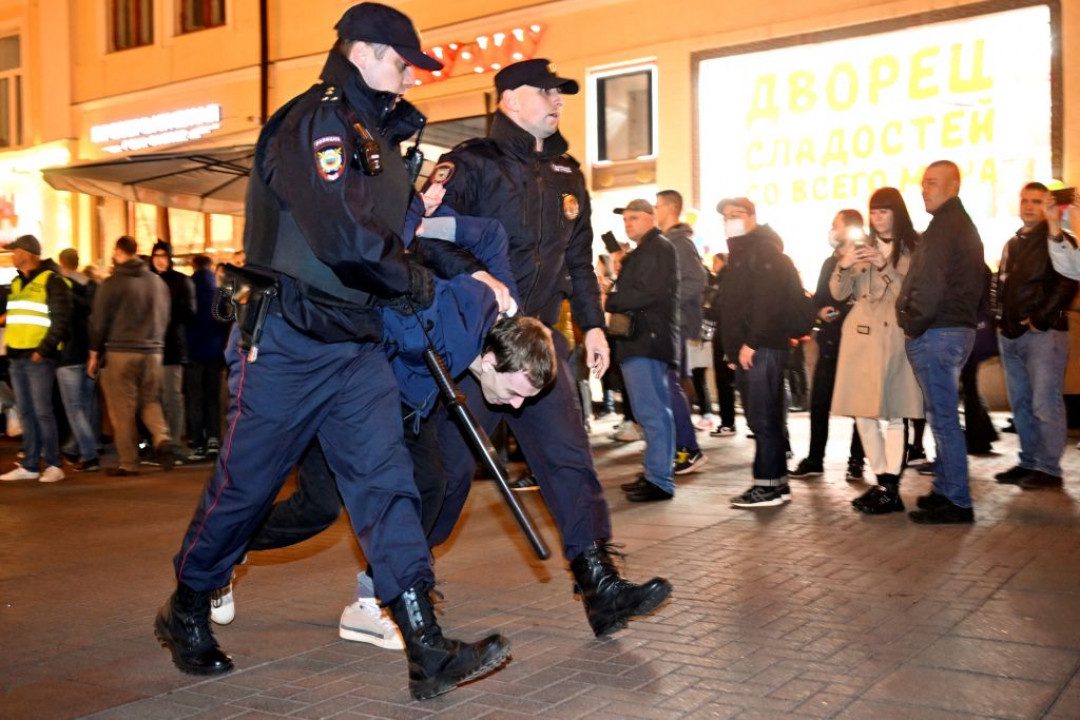 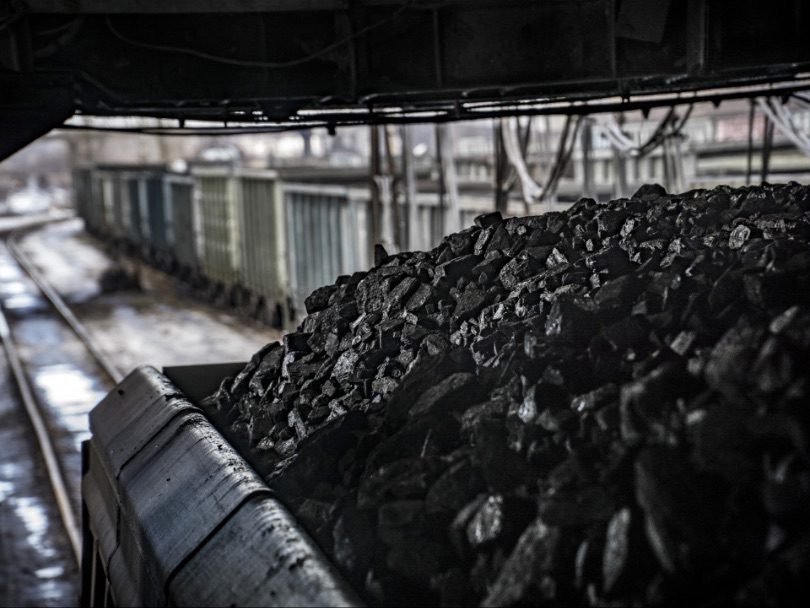 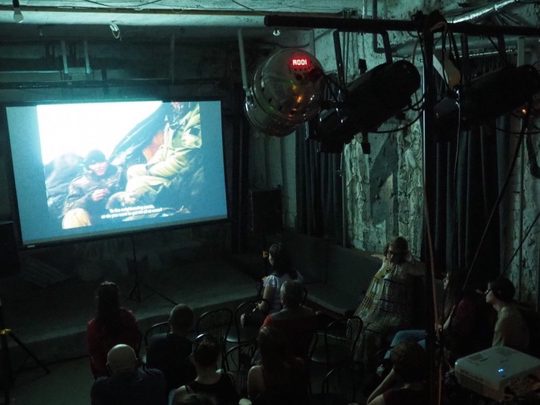 Mykolaiv theater lives on from bunker amid shelling. The bunker under the Mykolaiv academic theater was packed, with the last preparations well underway for an evening show 30 kilometers west of the front line.

Russia’s attacks kill 1 in Zaporizhzhia, 1 in Nikopol. In the past day, Russian forces have launched nine missiles on Zaporizhzhia, damaging infrastructure objects and residential buildings, one person has been killed, Zaporizhzhia Oblast Governor Oleksandr Starukh reported on Sept. 22. Russia has also shelled Nikopol, Dnipropetrovsk Oblast, with a Grad multiple launch rocket system, damaging 17 houses and killing a man, according to Valentyn Reznichenko, the governor of this oblast.

Liz Truss: Putin’s nuclear threats will not work. U.K. Prime Minister Liz Truss, in her address to the U.N. General Assembly, called Vladimir Putin’s threats to use nuclear weapons “saber-rattling” and said “this will not work,” the Guardian reported on Sept. 22. Truss has encouraged the world leaders not to make any compromises in Russia’s favor, despite concerns about soaring energy prices.

Slovak Defense Ministry: Mobilization will lead to Putin’s end. Slovakia’s Defense Minister Jaroslav Nad has called Vladimir Putin’s address to the nation “pitiful” and said that mobilization “will end up in the overthrow of Putin as president of the Russian Federation,” Euractiv reported on Sept. 22. Nad also reacted to Russia’s plans to hold pseudo-referendums on occupied territories, saying they are “only a pretext for future Russian claims about Ukrainians attacking ‘Russian soil,’” reported Euractiv, citing the official.

G7 to react to sham referendums with new sanctions on Russia. The G7 nations will not recognize the pseudo-referendums that Russia is preparing to hold in the occupied territories of Ukraine, said German Foreign Minister Annalena Baerbock on Sept. 22. The G7 members will also “pursue further targeted sanctions” on Russia if the “referendums” take place, she said.

Frankfurter Allgemeine: Russian fleeing mobilization could apply for asylum in Germany. Interior Ministry Nancy Faeser told the newspaper that Russians who oppose the regime and flee the country could be accepted as those running from “political persecution.” “As a rule, deserters threatened by severe repression receive international protection in Germany,” Faeser said, adding that granting asylum is a case-by-case decision.

Pentagon: Putin’s nuclear rhetoric will not affect aid to Ukraine. U.S. Defense Department press secretary Patrick Ryder said on Sept. 22 that Russia’s announcement would not influence the U.S. and its allies’ support for Ukraine. “We will continue to have those conversations, and we’ll continue to think through not only what they need in the medium to long term, but also what they need now,” Ryder said.